He headed the Department in its infancy. It was a small Department with few students. He prepared Langlands to replace him. Prof. Langlands is regarded as the most active Head the Department has ever had. He served 14 years as Head of Department in his career of 23 years (1953 – 1976). He taught nearly all the geography courses. He was a jack of all trades. He published very many articles about Uganda. He could have served longer than that if he had not been given 48 hours to leave the country by dictator Idi Amin Dada. He always regarded geography as an environmental science. His prophecy was realized in 2010 during the restructuring of the University when the Department became part of the College of Agricultural and Environmental Sciences (CAES). He was friendly if you understood him. He started paper 9 (Quantitative liquid methods) in the Department. This helped him to learn more about the hidden attributes of his students.

He was Head for a short time. He flee the country to Kenya due to political instability.

Dr. Muwonge headed the Department for a short time and left the country. 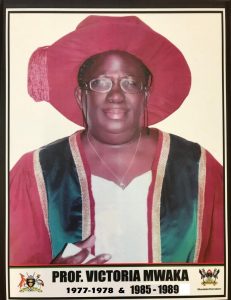 The first female geographer to hold a PhD headed the Department twice. Prof. Mwaka played a crucial role in the establishment of the Department of Gender Studies formerly the Department of Women Studies in 1991. She went ahead and headed until she joined the Constituent Assembly in 1994 – 1995 and later Parliament in 1996 – 2006. Prof. Ouma returned from Kenya after the fall of Idi Amin and embarked on the revival of the Department. He played a big role in the strenghthening of Geomorphology in the Department. He is well known for his centralized type of administration. He never allowed anybody  to stand in his way if he wanted to have something done. He was a fast mover. Slow fellows could not work with him. He stressed field work in the Department. Geography Department was the second one after Population Studies to get computers in Makerere University. This was because of his close links with Professor Ntozi. He left the Department in 1991 to head Population Secretariat. Mr. Were headed the Department with very few members of staff. This was one of the most difficult times of the Department. His main achievement was to convince members who had left the Department due to political and economic reasons to return and recruit new ones. As a result the Masters in Landuse and Regional Development (LURD) was started. Mr. Derek Muhwezi and Dr. Paul Musali were among the first three students on this program.

Mr. Kiboma headed the Department for about 6 months and left for Mbale Islamic University. Prof. Sengendo rejuvenated the Department by utilizing his fellow senior members, Prof. Nyakaana and Associate Prof. Basalirwa. During the reign of Professor Sengendo the Department utilized the policy of the University to start a number of private programmes. These included: Bachelor of Tourism, Urban Planning, Environmental Management and Development studies. The Department was envied by many. He was well known for a decentralized policy of administration. He convinced the Faculty of Arts administration to establish a post of Coordinator. Each program was headed by a Coordinator who had a lot of power and was assisted by an Assistant Coordinator. He initiated the post of Examination Officer to help in the running of exams. Due to his performance and being a member of the greatest Department in the Faculty of Arts, he was elected Associate Dean in 1999. Prof. Nyakaana inherited a very vibrant Department. He emphasized and encouraged members of the Department to acquire high qualifications. Collaboration with Norwegian University of Science and Technology played a big role in training many masters students especially the Assistant Coordinators. A good number of members of staff enrolled for PhD studies in the Department. He inherited  a department with some challenges including low finances , lowest profile in the school and college, low visibility and poor brand, low levels of staff rank in the college, poor infrastructure and limited field equipment, lack of strategic framework and direction, inadequate teaching aids. However  during his term in office, the status of the department was transformed, through modern infrastructure, new technologies that softened the research and teaching activities in the department. During his tenure, the department\’s had become an example to many other units in the university hence transforming it to greater heights. Assoc Prof. Frank Mugaggga is the current Head of Department since 2019.

Welcome to WordPress. This is your first post. Edit or delete it, then start writing!

Welcome to themegrilldemos.com Sites. This is your first post. Edit or delete it, then start writing!